The 18th century is the period of enlightment. Historians have however discussed if one can speak of an enlightment in Sweden. There was no political ideology connected to these ideas, and there was certainly no split between science and religion. Scientist were still as religious as anyone else, and new knowledge was seen as proof of God's existance. The world could not have been so cleverly constructed without him. 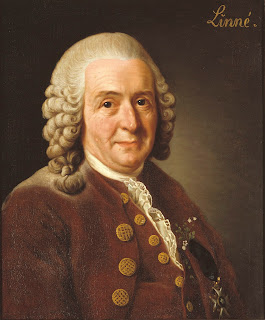 One of these religious scientists, Carl von Linné is probably the internationally best known Swede and his scheme for the naming of plants and animals is still in use. He had contempraries who also made international fame, like Anders Celsius - the man who made the Celsius temperature scale - and statistician Pehr Wargentin.

In the early 18th century the dominant economic theory was mercantilism - simply put the idea that import should be limited and thus that national production must grow. The idea meant state support for manufactures, and indirectly that jews and (later) catholics were allowed to immigrate if they were deemed to have a beneficial imfluence on the state's economy.

Later in the century new ideas turned focus to agriculture, to improve the productivity by reforms initiated and supported from above. In the mid 18th century laws on redistribution of land were put forward. The medieval village structure where farmers held some land in common and had their fields in narrow strips all over the village lands were now to be transformed. Each farm should have larger and fewer fields, easier to till without the entire village being involved. Farmhouses were moved to the new farmlands, and the closely built village of old was no more. Although the changes did in most parts of the country not take place until the next century.

At the royal castle Drottningholm, king Adolf Fredrik and queen Lovisa Ulrika supported the idea of national production by building "Canton", a manufacturing community specialised in production of things like lace and silk. The house to the left was the silk manufacture - but the production wasn't a success since the silkworms didn't really like Swedish climate.
Upplagd av Unknown kl. 07:51

sauerkraut, meat, turnips, lobster, caviar, smoked fish, shrovetide bun and champagne In1738 the party - or proto-party - "The hats", gained power in parliament. They wished to reclaime territories lost to Russia and in 1741, when the Russians succession was a bit messy, they saw a good chance by supporting one of the claimants to the throne. This woman, Elisabeth, daughter of Peter the great, did however manage to become empress by herself and the war that Sweden had begun thus wasn't of any use to her at all. And Sweden lost humilatingly. The peace however was rather kind to Sweden. Some more territories were lost, but not as much as could have been expected since the Russians instead took the opportunity to demand that Adolf Fredrik, a prince of Holstein-Gottorp, should be elected heir to the Swedish throne. Instead of gaining lost territories and managing Russian succession, the result thus was the reverse. In parts of Sweden this was an unpopular choice. Together with widespread dissatisfaction with the war, the election of Adolf Fredrik led to the last Swedish farmers rebellion, in Dalecarlia in 1743. 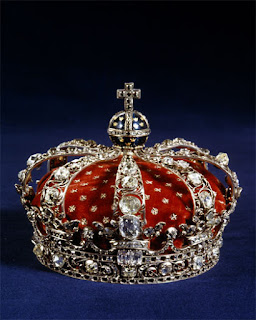 Adolf Fredrik became Swedish king in 1751 after the death of the childless Ulrika Eleonora and Fredrik I. He was married to Lovisa Ulrika, sister of Fredrik the great of Preussia - and the couple
was not at all satisfied with the weak position of the royal family, fighting parliament and council to gain more power. A failed attempt at a coup de etat in 1756 is really like something out of a film, he queen secretly removing diamonds from a crown and trying to sell them to finance the revolt. Adolf Fredrik died in 1771, according to tradition from eating to much - but really from a stroke that I suppose he might well have suffered without just having had a dinner of sauerkraut, meat, turnips, lobster, caviar, smoked fish, shrovetide bun and champagne.

The nice crown queen Lovisa Ulrika tried to pawn, or at least the large diamonds, to finance the coup de etat in 1756. The diamonds were eventually returned from a jeweller in Hamburg and restored to the crown.
Upplagd av Unknown kl. 08:22 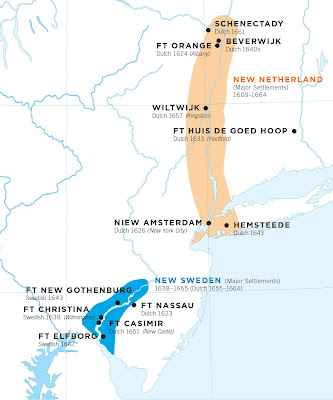 In the 17th century Sweden engaged in two rather half harted colonial enterprises. Gaing incomes through trade sounded nice, and private efforts had shown that money could be made. Sweden was a rather late participant though and took help from private Dutch merchants when the first colony, New Sweden, was established in Delaware in North America. Finding people prepared to cross the Atlantic for a new life wasn't easy, but some hundred farmers as well as administrators and soldiers did make the trip. Their encounters with the native indians in the area were mostly peaceful, though both parties found it sometimes hard to understand oneanother. Sweden's first priority in the 17th century was the expansion in the home area, and the colony was fairly neglected. It soon was taken over by first the Dutch and later the English.

A trading post was also established in Cabo Corso on the western coast of Africa, and later - in the 18th century, Sweden bought the island St Barthélémy in the West Indies.

Yes, I acutally work as a historian. At Uppsala University - Campus Gotland, in Visby. And I like teaching history regardless of distribution method, so why not a podcast and blog! I also like dogs, in particular my own Italian greyhound Pompe - named after king Charls XII's dogs. (Though they were not IGs.)